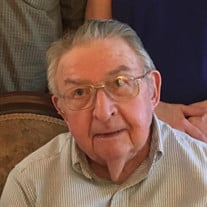 MOCKSVILLE—Mr. Benjamin Emil Nayder, 94, of N.C. Hwy. 801 S., passed away Tuesday, December 21, 2021 at Novant Health Forsyth Medical Center in Winston-Salem. He was born on November 25, 1927, in Chicago, Illinois to the late Thomas Joseph and Rose Cecilia Truhlar Nayder. Mr. Nayder served in the U.S. Army for two years during the Korean Conflict. He was stationed at Fort Bragg and visited St. Benedict’s Catholic Church in Greensboro, where he would meet his future wife, Martha Thomas. They became the first couple to be wed at Our Lady of Grace Catholic Church in Greensboro, and then moved to Davie County in 1960. Upon moving to Mocksville, they joined St. Francis Catholic Church in Mocksville. Ben worked at Western Electric for many years as a chemical engineer. He enjoyed working outdoors, hiking, reading magazines, watching science shows on television, and possessed a very elaborate collection of arrowheads that he found throughout his life. Ben also loved math and spent many hours working on tricky math problems, and the trickier the better! He will be remembered as a loving husband, father, grandfather, brother, and friend to many. In addition to his parents, he was preceded in death by four sisters, Blanche Nayder Martin, Rose Nayder Haba, Alice Nayder Koski, and Lorraine Nayder Woodruff; and three brothers, Joseph Nayder, Thomas Nayder and Francis Nayder. Suvivors include his wife of 69 years, Martha Thomas Nayder, of the home; children, Barbara Nayder, also of the home, Ben Nayder of Raleigh, and Catherine Richardson (James) of Greensboro; grandchildren, Eleisia Richardson Balaguer (Juan) and Alexander Richardson; a great-grandchild, Helios Balaguer; and numerous nieces and nephews and many great- nieces and nephews. A funeral mass will be conducted at 10 a.m. Thursday, December 30, at St. Francis Catholic Church in Mocksville, with Father Eric Kowalski officiating. Interment will follow in Sacred Heart Catholic Church Cemetery in Salisbury. Friends may pay their respects by visiting Eaton Funeral Home from 12 p.m. to 5 p.m. on Wednesday.

The family of Benjamin Emil Nayder created this Life Tributes page to make it easy to share your memories.

Send flowers to the Nayder family.