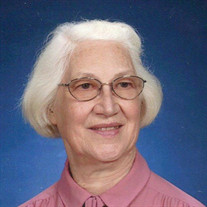 MOCKSVILLE – Dora Elizabeth Leonard, 97, formerly of Narrow Way, died Thursday, February 24, 2022, at Forsyth Medical Center in Winston-Salem. She was born on August 16, 1924, in Kannapolis, to the late C.C. and Mary Elizabeth Harbin Leonard. Dora was a devoted Christian and a member of Oak Grove United Methodist Church, where she was a member of the United Methodist Women. She retired from Western Electric in Winston-Salem. In her younger days, she enjoyed travelling. Even in her later years, she still had a keen mind and impressive memory. She also enjoyed playing Scrabble, Skip-Bo and Dominoes. Not having children of her own, she always enjoyed spending time with her nieces and nephews, especially when they were little. Her family was very important to her, and every member of her family was touched by her continuous generosity. In addition to her parents, she was preceded in death by two brothers, Brady Lee Leonard and James Cecil Leonard. Survivors include a sister, Ella Mae Leonard Phillips (Thomas) of Mocksville; seven nieces and nephews; and seven great-nieces and great-nephews. A graveside service will be conducted at 3 p.m. Tuesday, March 1, at Oak Grove United Methodist Church Cemetery, with Rev. Bob Summers officiating. The family will receive friends from 1:30 to 2:30 p.m. on Tuesday, at Eaton Funeral Home. In lieu of flowers, memorials may be considered for Oak Grove United Methodist Church Cemetery Fund, 1994 US Hwy 158, Mocksville, NC 27028.

The family of Dora Elizabeth Leonard created this Life Tributes page to make it easy to share your memories.

Send flowers to the Leonard family.