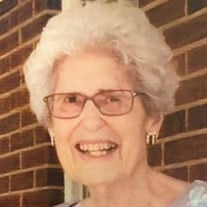 MOCKSVILLE - Mrs. Jane Glasscock Tutterow, age 96, of Sheffield Road, passed away on Thursday, June 9, 2022, at her home. She was born on May 12, 1926, in Davie County, to the late Marshall Everette and Katherine Rollins Glasscock. Jane attended Noah’s Ark School and graduated from Mocksville High School in 1943. She lived in the Ijames community all her life except for several years during WWII when she moved to Winston-Salem, where she was employed at the Winston-Salem Journal, National Carbon Co., and Hanes. She was married to Earl Milton Tutterow on February 15, 1947. They were happily married for 75 years. She sometimes traveled with her husband due to his construction business, but they always maintained their residence. Jane was a good wife and mother who took care of her home and family. She was a member of Ijames Crossroads Baptist Church and served as Sunday School teacher and in many other capacities over the years. The couple’s life was filled with love, loyalty, and devotion for each other. They had many friends and family who felt at home with them. They lived their lives with dignity and character that was recognized and experienced by friends, family, and everyone who has known them. They showed that a long and happy marriage not only benefitted them but also continues to strengthen and give hope to the ones they loved. Jane was a caregiver to her mother-in-law and continued to care about others until her last days. She had a heart for the less fortunate and was very giving. She took preachers and missionaries into her home on several occasions. In addition to her parents, she was preceded in death by her stepmother, Ellen Rollins Glasscock; two brothers, R. Clyde and Thomas Glasscock; and three sisters, Nancy G. Allen, Dorothy G. Taylor, and Mary G. Spillman. Survivors include two children, Larry M. Tutterow (Marsha), and Pamela T. Branham (Mike) all of Mocksville; four loving grandchildren, Sharon McDaniel (Todd), Sheila Baity (David), Amber Boger (Jeff), and Derek Branham (Andrea); four great-grandchildren; five step great-grandchildren; four great great-grandchildren; and a brother, Marshall Everette Glasscock (Brenda) of Mocksville. A graveside service will be conducted at 2 p.m., Sunday, June 12, at Ijames Crossroads Baptist Church Cemetery with Rev. Kestler Ruth officiating. Friends may pay their respects to Mrs. Tutterow from 1 to 1:45 p.m., in the church. Memorials may be considered for Ijames Crossroads Baptist Church Cemetery fund, 1038 Ijames Church Road, Mocksville, NC 27028 or to Well Care Hospice, 5380 US Hwy 158, Suite 210, Advance, NC 27006 or to a charity of the donor’s choice.

MOCKSVILLE - Mrs. Jane Glasscock Tutterow, age 96, of Sheffield Road, passed away on Thursday, June 9, 2022, at her home. She was born on May 12, 1926, in Davie County, to the late Marshall Everette and Katherine Rollins Glasscock. Jane attended... View Obituary & Service Information

The family of Jane Glasscock Tutterow created this Life Tributes page to make it easy to share your memories.

Send flowers to the Tutterow family.